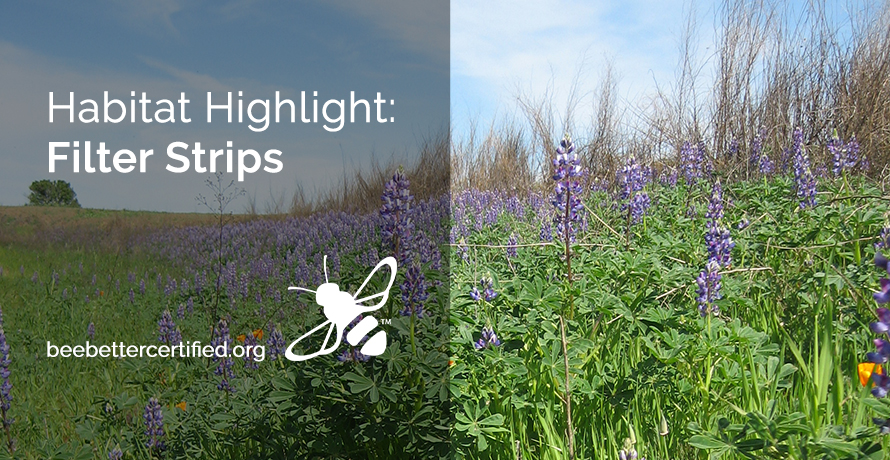 Filter strips are a great opportunity for adding habitat to meet habitat minimums while utilizing existing site features. Filter strips can be designed to reduce flow of sediment, excess nutrients, and pesticides into waterways, which can help improve water quality, reduce flooding, and ensure healthier populations of aquatic invertebrates.

Filter strips may be dry for extended periods of time, then experience occasional flooding. Such extremes may make it seem as though these are tough areas to maintain as habitat, however there are many valuable native plants that are adapted to such conditions. Plant selections should include a mix of native grasses, flowering perennials, and woody plants. 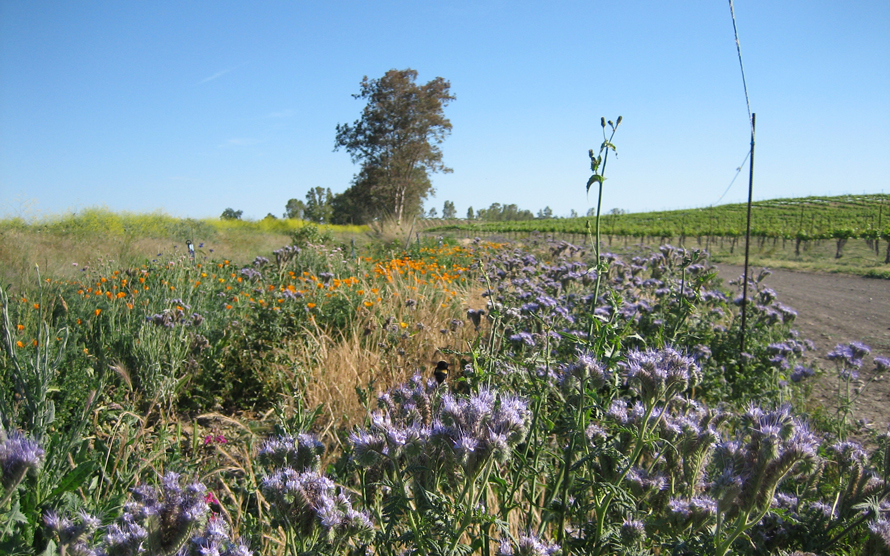 Native grasses provide larval food sources for skippers and other butterflies, and are used for spreading out and slowing down concentrated flow as well as holding sediment in place. Flowering native perennials provide forage for pollinators and often feature deep and extensive root systems that infiltrate water back into the soil and reduce flooding. Woody plants can be used along stream banks and elsewhere to reduce erosion, button bush (Cephalanthus occidentalis), spicebush (Lindera benzoin) and many native dogwood species (Cornus spp.) are well adapted for this use.

When using a filter strip to capture pesticide runoff, do not plant flowering species as they may inadvertently expose pollinators to pesticides. Instead plant non-flowering grasses, shrubs or evergreen trees.

From the Field: The Muller Vineyard in the California Central Valley installed a filter strip to capture excess runoff into an irrigation canal located at the base of a field that is on a slope. The filter strip is still thriving a decade later. It contains a mixture of native and non-native flowering forbs as well as native flowering shrubs. It even has some pomegranate trees interspersed throughout. The site has been part of a few multi-year studies on the benefits of hedgerows to adjacent crops conducted by the University of California, Berkeley. The filter strip supports numerous pollinator species that contribute to pollination of the field across the irrigation canal, which contains a rotation of sunflower and tomato.

Where to plant: Along waterways or drainage channels.