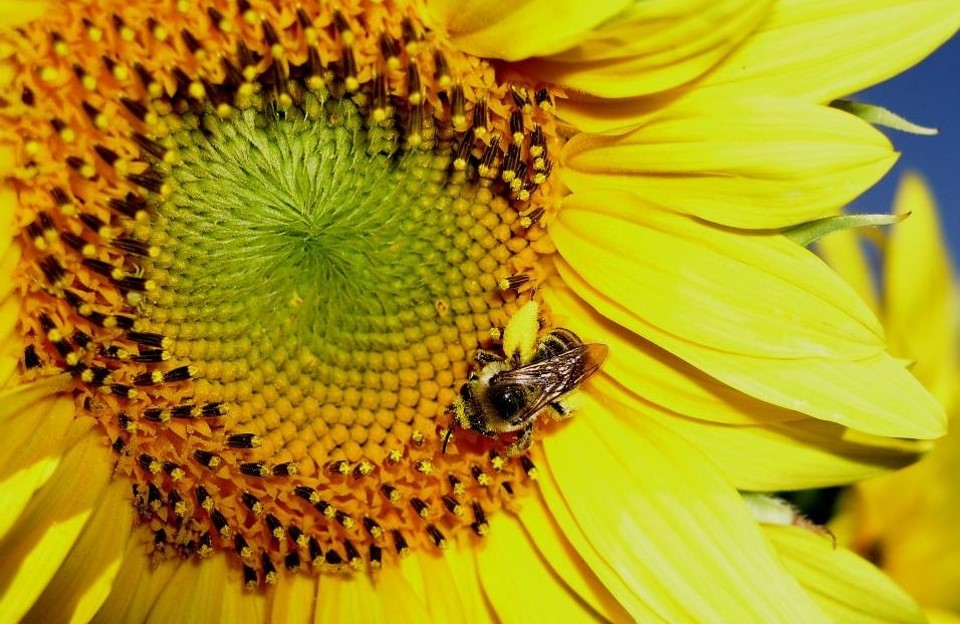 Neonicotinoid insecticides are widely used in agricultural and urban settings. Released in the mid-1990s as an alternative to older organophosphate and carbamate insecticides, neonicotinoid insecticides are highly toxic to many invertebrates, including bees. They are systemic, meaning they are absorbed and retained in plant tissues, making all parts of the plant toxic to insects. Even very small concentrations of these insecticides found in the pollen and nectar of treated plants can be harmful to pollinators (for a review of recent research, see the Xerces Society report, How Neonicotinoids Can Kill Bees)

What’s more, most neonicotinoids are highly persistent, sometimes remaining at harmful levels in woody plants and soil for months to years after they were applied (Jones et al. 2014). Untreated plants sown in areas formerly treated with neonicotinoids, such as cover crops that follow a rotation of treated corn or soybeans, can pick up residues from these prior applications (Bonmatin et al. 2005). In addition, neonicotinoids applied to crops can contaminate plants in surrounding areas, which poses risk to the bees that visit these plants for pollen and nectar (Botías et al. 2015; Mogren and Lundgren 2016).

Jointly, the toxicity, systemic nature, and persistence of neonicotinoid insecticides pose a high risk to bees. For this reason, Bee Better prohibits any use of nitroguanidine neonicotinoids, the highly bee-toxic subgroup of neonicotinoids (e.g. imidacloprid, dinotefuran, clothianidin, and thiamethoxam).

Bee Better aims to establish and maintain healthy flowering habitat that can support bees and other beneficial insects. The persistence of neonicotinoids in soil can pose a contamination risk months to years after these chemicals are applied. Therefore, Bee Better pollinator habitat cannot be placed in areas where neonics were applied, including the planting of treated seed, in the previous two years. In addition, permanent pollinator habitat on Bee Better farms must adhere to the spatial buffer requirements for areas currently treated – or suspected to be treated, in the case of neighboring land – with neonicotinoids.

Crops:
Do not use nitroguanidine neonicotinoids (clothianidin, dinotefuran, imidacloprid, and thiamethoxam). This ban includes the planting of treated seeds. (Standard 2.2d).

Establish a pesticide-free buffer around permanent pollinator habitat. Spatial buffers should meet the following minimum width: 40 feet for ground based applications and 60 feet for airblast applications. (Standard 2.3c, i).

Buffers are required within your own property, as well as between new permanent pollinator habitat on your property and neighboring farms or land where insecticides are known or suspected to be applied. When insecticide application practices on neighboring properties change following permanent habitat creation on your parcels, spatial buffer requirements can be waived, although when feasible, we recommend incorporating a buffer. When permanent habitat is adjacent to farms containing canola, corn, cotton, soy, sunflower, and wheat, seed treatment buffers must be adhered to unless there is proof that neighboring farms are not treated with nitroguanidine neonicotinoids (e.g., they are certified organic). (Standard 2.3c, iii).

For more information on neonicotinoid risks to bees, see the following resources:

Copyright © 2017 - 2022, Xerces Society • 628 NE Broadway Ste 200, • Portland OR 97232 USA.
The Bee Better Certified™ mark, Program Mark, and Seal mark are trademarks of the Xerces Society Inc
and are subject to terms as defined in our Branding and Trademark Requirements.